They may have a remote origin in the biblical theme “Josué and Caleb bringing grapes and other fruits from the Promised Land”, also called “Return of those sent to the land of Canaan”, as they are formally similar. In this episode, giant grapes, figs, pomegranates and other fruits are brought from this land as it is represented in several paintings existing in Madeiran churches. The scene is related to Eucharistic themes, devotion to the Blessed Sacrament and the Holy Spirit, as shown, for example, in a painting from the late 18th century on a side wall of the chapel of the “Santíssimo”, in the parish church of Ponta do Sol. In this chapel in the gilded altarpiece, a dove, symbol of the Holy Spirit, is represented in the center.

Regarding charolas, in Madeira, in 1843, an image of the designer William Springett and the lithographer Thomas Picken was published in the book Recollections of Madeira, entitled “The Xerola”, composed of two men carrying a stick with a huge charola made of fruits and vegetables tied to a spherical structure.

The tradition of charolas continues today, in Madeira, such as at the “Fajã da Ribeira”, in “Ribeira Brava”, during the “São Pedro” festival, and in the parishes of “Loreto” and “Arco da Calheta”. In these last two parishes the charolas are presented during the Holy Spirit festival, related to solidarity, sharing and helping the most needy. In “Fajã da Ribeira”, a large charola is prepared, and in the parishes of “Loreto” and “Arco” the community of each place produces a charola, with some competition between the various places. The various charolas are transported on foot or by car to the church or chapel - the center of the festival - and there they are exposed and auctioned, reverting the amount collected to the parishes.

In traditional Madeiran charolas, agricultural products grown by the local population stands out, such as “semilha”(potatoes), sweet potatoes, bananas, carrots, pumpkins, onions, cabbages, yams, beans, etc. The charolas symbolize the “farmers thanks for the land fertility and for the blessings achieved during the year”, as Carina Teixeira refers, in her book, the presence of the charolas in the festivities of Espírito Santo in Arco da Calheta.

On other occasions, as in the traditional Christmas pilgrimages, it is also customary in some parishes in Madeira to offer fruits and vegetables tied to a stick in the shape of a charola or arranged longitudinally along it. 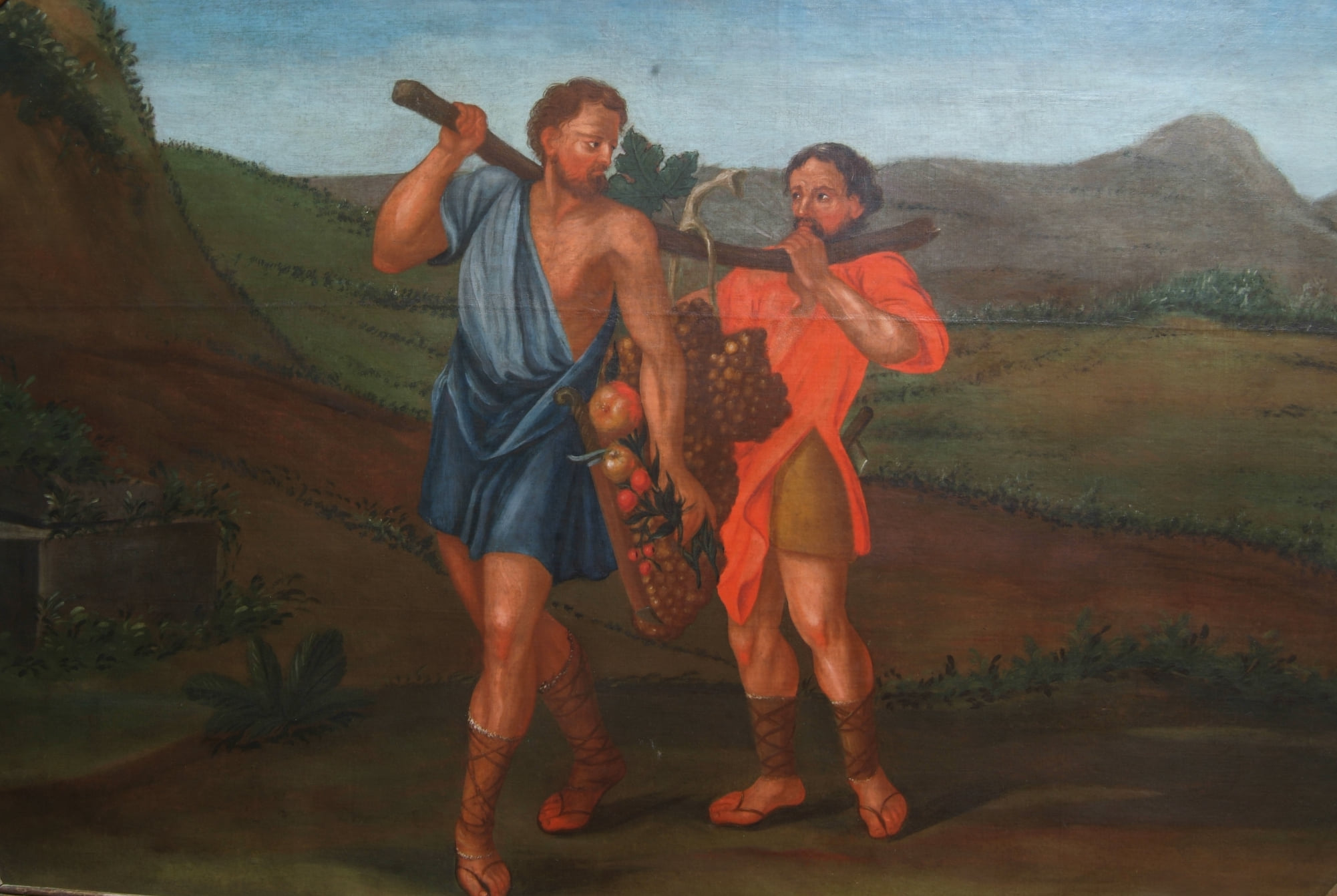 Josué and Caleb bringing grapes and other fruits from the Promised Land ”, end of the 18th century, painting in the chapel of “Santíssimo”, mother church of Ponta do Sol. 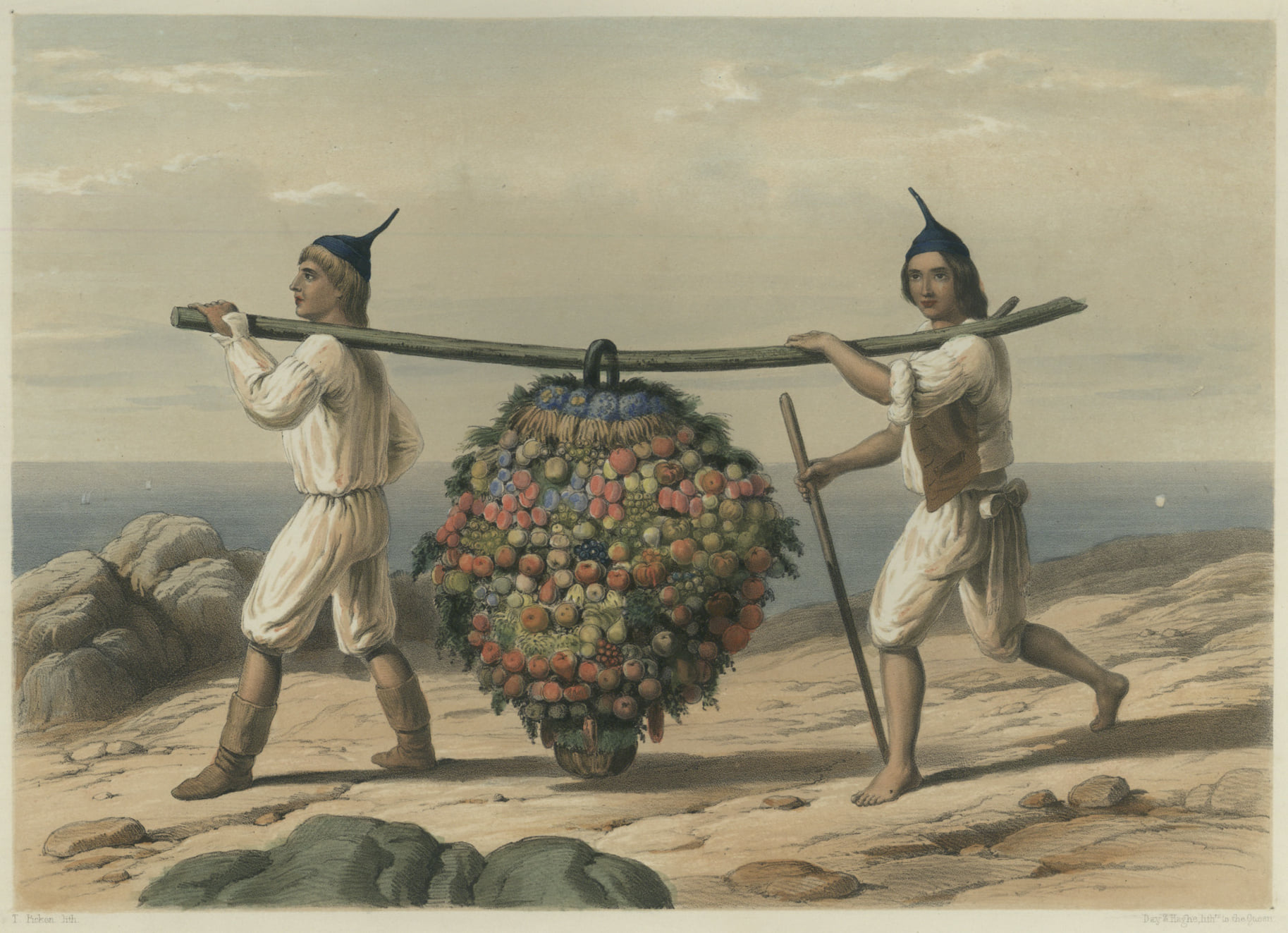 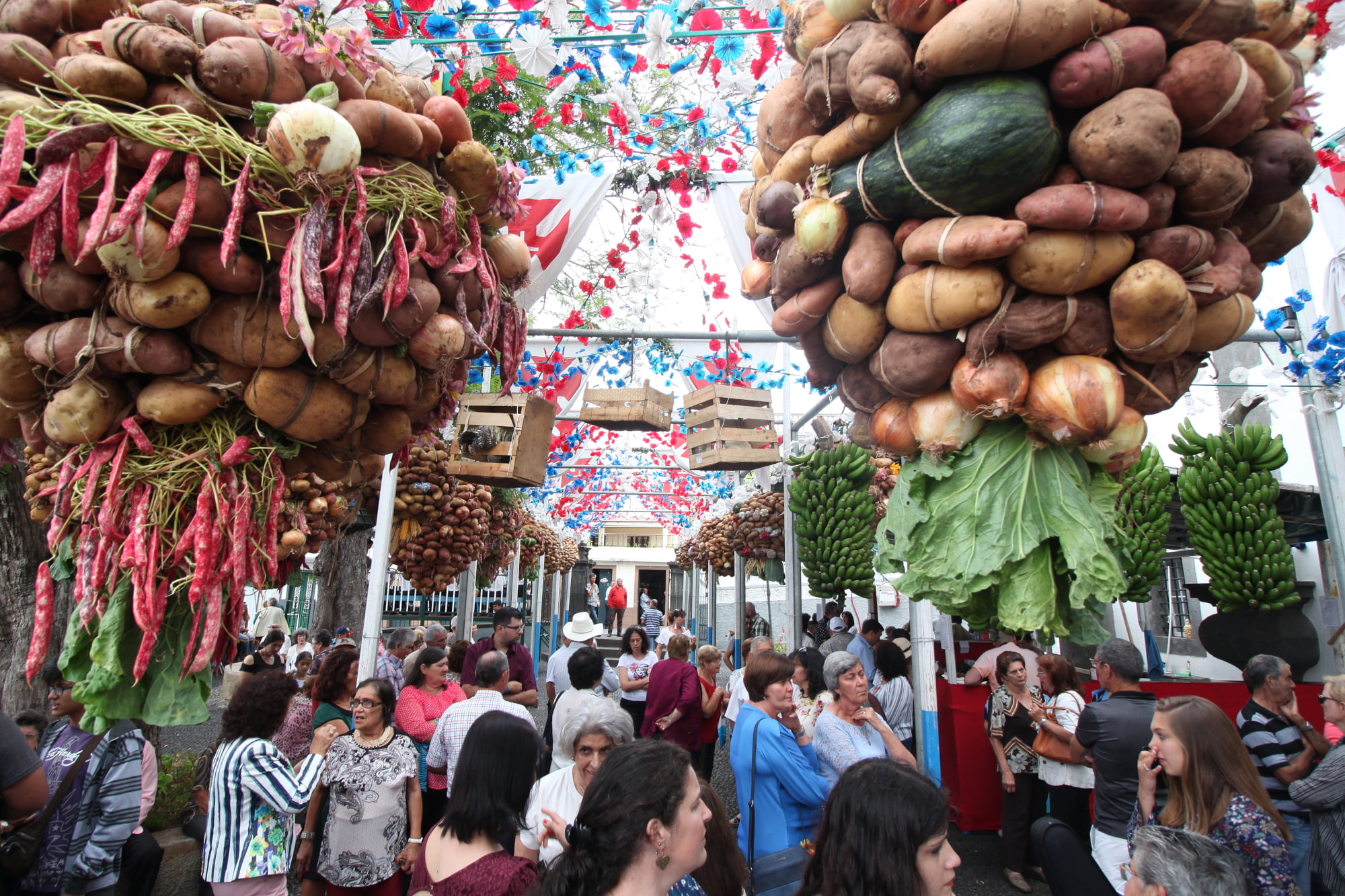 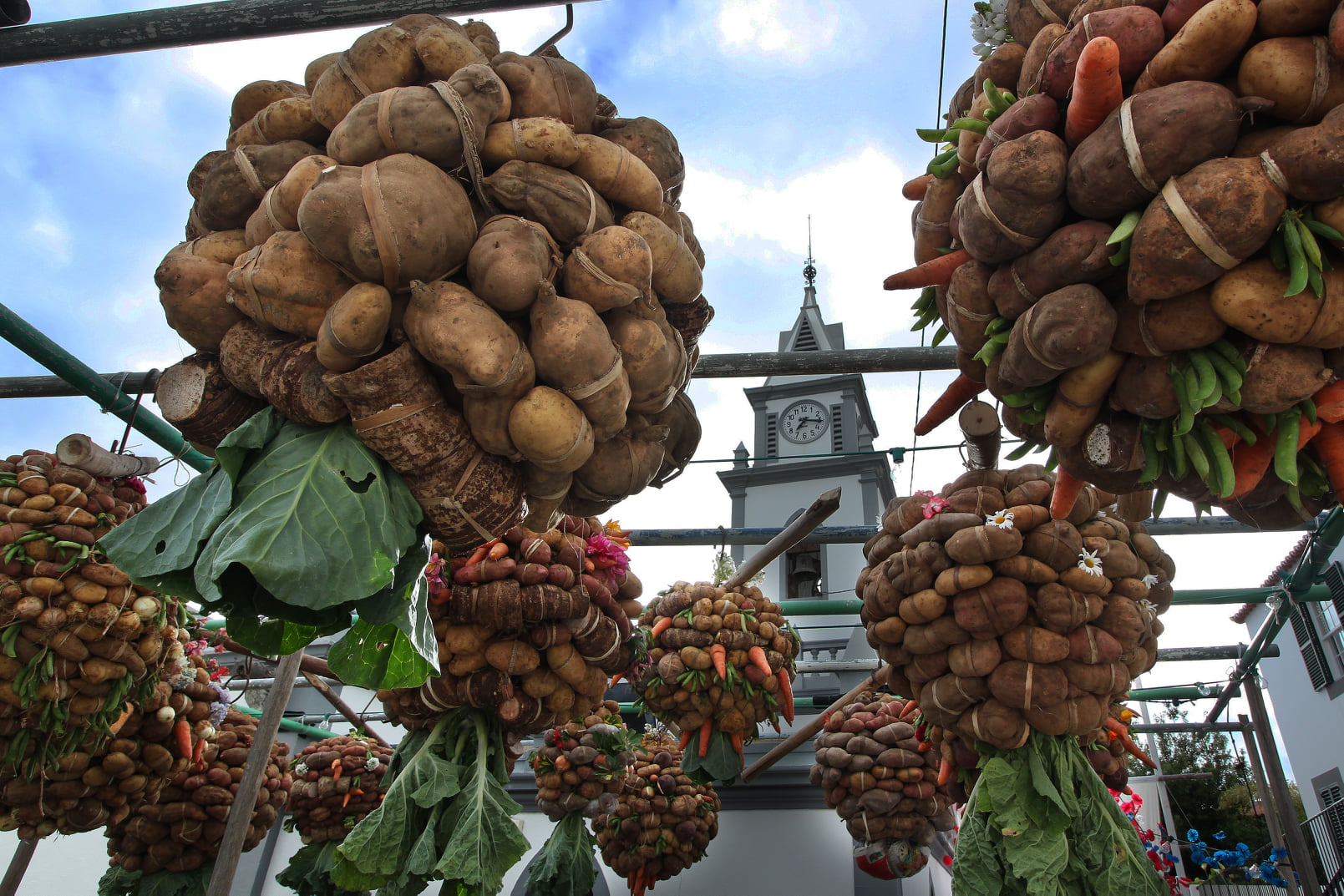 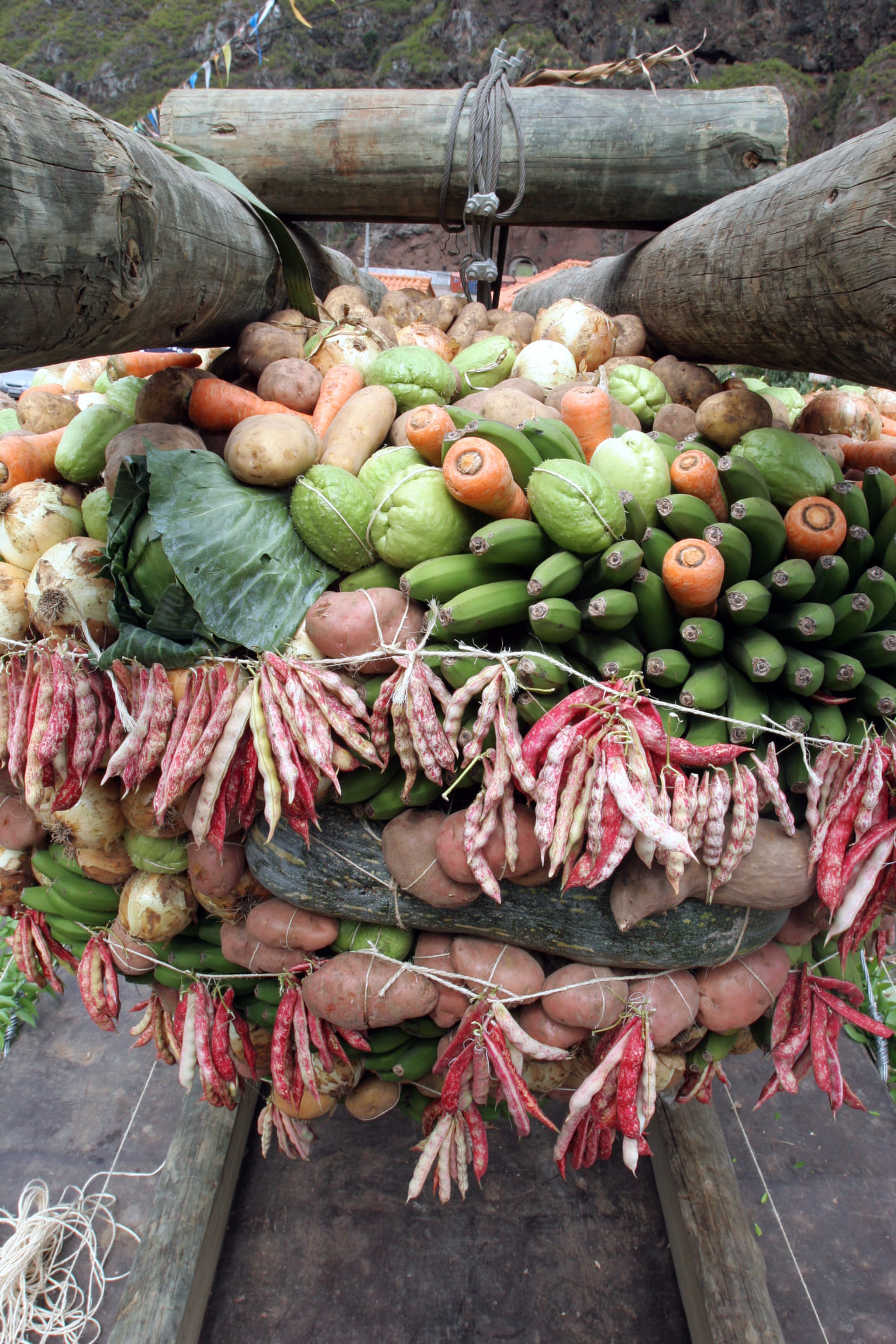