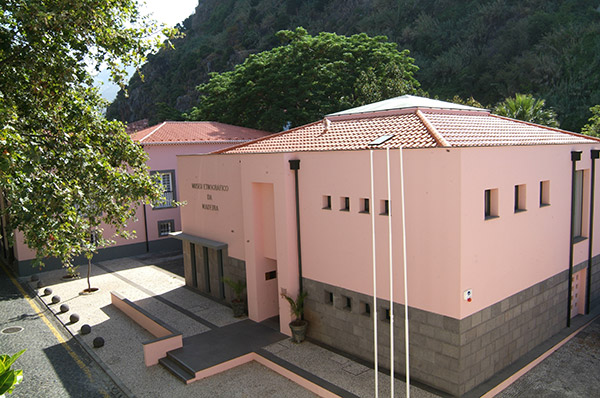 In the early seventeenth century, the Convent of Santa Clara in Funchal, had the direct control of several properties in Ribeira Brava, one-story house in the old Rua da Bagaceira, a seventeenth century artery where is now the Ethnographic Museum of Madeira. The house outside of Funchal, was acquired by Gonçalves da Silva, captain of the ordinances of Ribeira Brava, who married in 1682, with D. Antonia Meneses.
Captain Gonçalves da Silva, then expanded his housing, and added a floor in the southern flank of the building, ordered the construction in 1710, of a chapel dedicated to the patriarch St. Joseph, where he would be buried. Although modified we still can see, implemented in the building where the Ethnographic Museum is installed, the chapel ´s doorway.
Gonçalves da Silva and his wife by testamentary disposition made in 1716, established a perpetual bond imposed in the house where they lived, in several farms and in their own chapel of St. Joseph, which was only abolished in 1860. In 1853, José Maria Barreto, administrator of the last bond of St. Joseph, converted the ruined property into a solar plant, and to this end established a partnership with Jorge de Oliveira.
Then there was mounted an animal traction mill for grinding sugar cane, and a brandy distillery. In 1862 the manufacturing company, with a new partner, Father João António de Macedo Correia and Freitas, now using hydraulic power, settling in that year, a driving wheel of wood, served by a levada ( a typical Madeiran route of water), and a mill for grinding cane with three horizontal iron cylinders. In 1868, also worked at that factory two grain mills.
Over the years successive transactions of shares of the company occurred and finally in 1974, the heirs of João Teixeira, the building owners, sold it to the General Board of Autonomous District of Funchal.
The Madeira Regional Government decided to install the Ribeira Brava Madeira Ethnographic Museum in the old mill, designed by the architect João Francisco Caires and inaugurated on 15th June 1996.
The Museum has the vocation to research, persevere and disseminate the evidence of the traditional Madeiran culture. The Museum includes collections covering various aspects of social, economic and cultural life in Madeira archipelago, being ethnography the vocation area.
The area of the permanent exhibition is organized by themes: production activities (fishing, production cycles of the wine, grain and flax), transport, households (kitchen and bedroom) and traditional shops (grocery store).

Educational Services
Concerning the educational level, the institution seeks to raise awareness of a participatory regional ethnographic heritage, promoting the link between school / museum / community, awareness of the importance of knowledge and preservation of cultural heritage, to awaken a critical sense and aesthetic sensibility and foster a taste for the discovery.

Planned Activities
Guided tours for the 1st, 2nd, 3rd cycles of primary and secondary education.
Guide quizzes, games and other fun activities taking into account different levels of education and to address thematic interests from the perspective of non-formal education.

Information and Registration
The guided tours must be pre-marked and should still be confirmed by phone, fax or email.
The groups must be accompanied by a teacher or other responsible member. Each group should not exceed the maximum number of 25 students.

Shop
The museum has a shop with the same opening hours.
In this space there are museum editions and other cultural issues and genuine handicrafts from Madeira, available to the public.