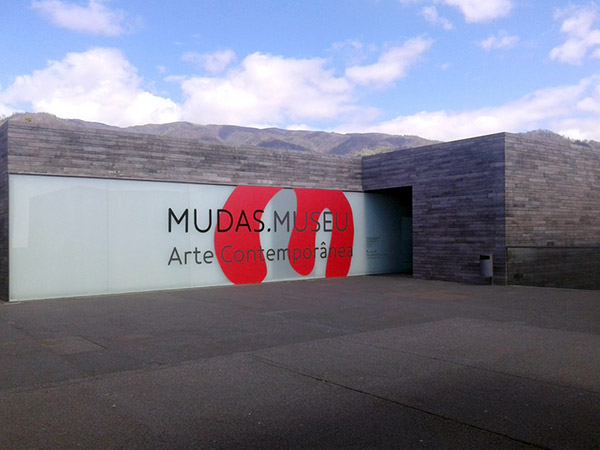 The Museum of Contemporary Art was created in 1992, when the Fort of São Tiago, until then under military administration, was transferred to the Regional Government of Madeira, under the Regional Directorate of Cultural Affairs. The Fort of São Tiago was built in 1614 to defend the bay of Funchal, during the period the island was under the rule of Philip II of Spain.
The collection of the Museum is made up of contemporary Portuguese art dating from the 1960s to the present, being built around the initial collection of the Plastic Arts Prizes of the City of Funchal, which were awarded in the years 1966 and 1967. This beginning of a collection was temporarily in exhibition in the rooms of the Quinta Magnólia, in Funchal, from 1986 until 1992, when it was transferred to the Fort of São Tiago.
This initial set of works includes the works of Joaquim Rodrigo, António Areal, José Escada, Helena Almeida, Jorge Martins, Artur Rosa, Manuel Baptista and Nuno de Siqueira, among others.
This institutution has undertaken a policy of acquisitions, and its collections include works from many of the most outstanding Portuguese plastic artists, some of whom were born in Madeira Island: Lourdes de Castro, Maria Helena Vieira da Silva, Fernando Calhau, António Palolo, Rui Sanches, João Queiroz, Michael Biberstein, Patrícia Garrido, Martha Telles, Pedro Cabrita Reis, Ana Vidigal, Gäetan, Eduardo Batarda, Daniel Blaufuks, Bárbara Assis Pacheco, Miguel Branco, Pedro Calapez, Pedro Casqueiro, Rui Chafes, Pedro Portugal, José Pedro Croft, Ilda David, Jorge Molder, José Loureiro, Álvaro Lapa, Ana Hatherly, João Vilhena, Alberto Carneiro, Pedro Gomes, Pedro Proença and many others.
The Museum’s collection of Portuguese contemporary art is mainly made up of works acquired from art galleries or the artists themselves, and added to this core collection are donations from the exhibitions of the former Gallery of the Regional Secretariat of Tourism and Culture and from private donors, such as Ana Hatherly, Pedro Valdez Cardoso, Albuquerque Mendes, Sofia Areal, among others.
In October 2015, this institution was transferred to the Casa das Mudas Arts Centre in Calheta, a project of the architect Paulo David that was inaugurated in October 2004, having been built on the former property of the Casa das Mudas. The institution’s name was changed accordingly and is now called Mudas. Museu de Arte Contemporânea da Madeira.

Educational Service
Used as spaces for pedagogical activities, museums play an increasingly important role in the school community and among other institutions that make up the social fabric, fostering the exploration of knowledge and seeking to promote learning opportunities. In this context, through its Educational Service, and in addition to the guided tours it gives to school groups and private visitors who request it, the Madeira Museum of Contemporary Art carries out a series of activities that are recreational and pedagogical in nature, seeking whenever possible to raise the awareness of the public and motivate various sectors of the public to the subjects of art, history, architecture and citizenship, reinforcing its action by museum/school links, as a vehicle for sharing knowledge and experiences that promote an approximation to contemporary culture that is dynamic, but above all, creative.

Document Centre
The mission of the Document Centre/Library of the MCA is the study of Contemporary Portuguese Art, although it has in its collections documents related to Art History, History of the Region, General History, some specialised foreign literature, as well as magazines and periodicals, individual dossierswith bibliographic references of the artists represented in the MCA, plus other materials that are not in the form of books, such as posters, post cards, invitations, bookmarks, etc. The acquisitions policy implemented by the
MCA has allowed the institution to bring together a significant number of bibliographic works, as well as some analytical documents collected from the media(regional, national and foreign records).

Intitution in charge:
Department of Culture