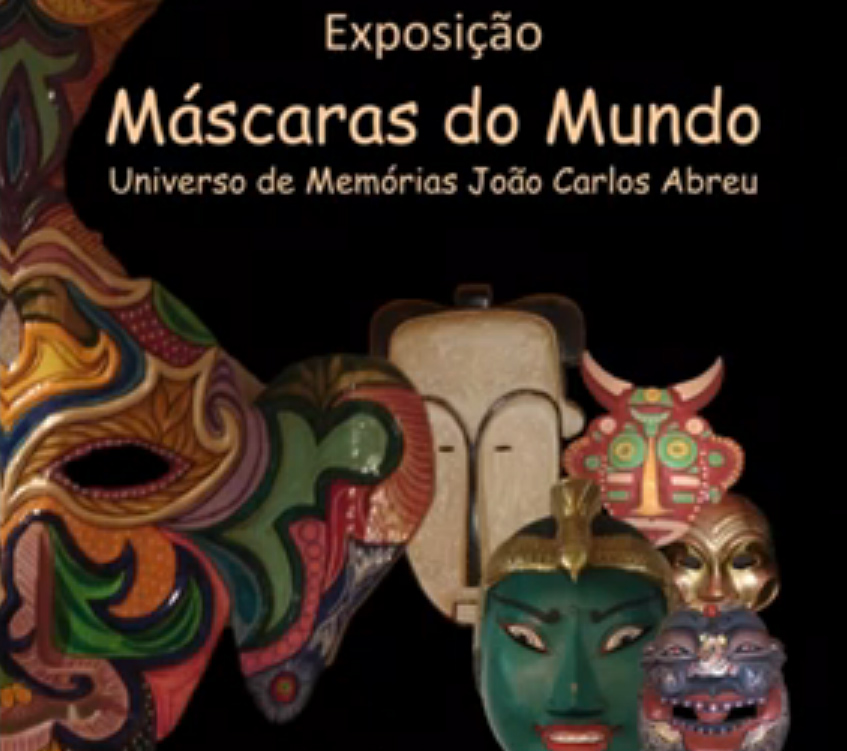 The exhibition "Máscaras do Mundo" in the Universe of Memories João Carlos Abreu, presents one of the collections that integrate the museum collection unit, composed of masks from different parts of the world.

ITALY
The Venetian mask is the authentic icon of Carnival, initially conceived for men to beautify and transform themselves and later, used as a decorative object, it turned out to be the main profitable business of Venice. The first masquerade ball, “Ball Masquê” takes place in the 15th century and from that time on, the courtiers began to mask themselves, playing games and, confident in the anonymity, expressed all their repressed desires, and thus, felt freed from all social standards.
The most popular characters of the Venetian Carnival are those that derive from the theatre “Commedia dell’arte”, a popular drama that emerged in Italy.
Key characters:
Colombina - maid / servant, humorous, malicious and Harlequin lover
Harlequin - servant / servant wearing simple, sometimes colourful clothes, energetic, clever and cowardIl Dottore - doctor, lawyer or other prestigious profession whose clothing is black

GREECE
In ancient Greece, the masks denoted not only a ceremonial component, but also a theatrical one, representing the personality of the characters:
Comedy: funny stories, real satires of everyday life
Tragedy: dramatic stories that incite terror and pity

Nowadays, there are many artists and craftsmen who create masks exclusively as decorative items.

CHINA
Although Chinese masks are mainly associated to the arts (dance, theatre and opera) and religious rites (births, weddings and funerals), the masks can also be related to exorcism and to the treatment of illnesses.

SRI LANKA
Sri Lankan masks depict a close connection to the earthly and the spiritual world, combining the beliefs and practices of Hinduism and Buddhism.
In the Theatre of Masks one can find demons, which directly interfere in daily life, such as the Yakku and the Rakshas, that manifest in different shapes, being the most frequent one that of a snake. For this case, all theatre actors are men and the dialogues are usually short due to the characteristics of the masks.

INDONESIA
Even though Balinese and Javanese masks are the most popular ones, all of Indonesia has an ancestral tradition in what concerns masks, both religious and theatrical. At funeral gatherings, for example, the dead are honoured with offerings, dances with masks and food in order to help their spirit on the long journey ahead and ensure the well-being of the living. Following the ceremony, the masks are buried together with the body or hung on the tombstone.
Since dramas and dances were performed in the temples as an offering to the Gods, theatre is also associated to religion. In the art of masks, there is no separation between the real and the magical and on stage only men wear a mask as audiences wish to contemplate the feminine faces.

The typical African masks originate from ancestral tribes and are mostly wooden masks because according to popular beliefs, the tree is the guardian of magical powers.
It is believed that each mask has a soul or a force of Nature, and that when a person's face touches the mask, it becomes the entity that the mask embodies. In such a way, that its bearer captures its vital energy, distributing it to the community - healing sick people, or used in funerals for the liberation of souls, in ceremonies for land fertility / good harvests, also used in hunting rituals, initiation ceremonies, weddings and births.
In African culture, the mask is a sacred element and, as such, only specially qualified people will be able to wear and possess it.

PATAGONIA
These masks are mainly employed in indigenous rituals that vary according to the location and its influences, whether if nearer to Argentina or Chile. The raw material applied is that which nature offers, such as leather, wool, shell, sisal, wood and copper, as the most common ones.
Mexico
Originally, the masks were representative of a religious element and were used at funerals by priests who reincarnated different Gods. Currently, the objects are still worn in processions, but its evidence is mostly found in theatres, balls and carnival parades.

PERU
Due to the strong influence of the Inca culture, the mask represents a force of nature personified in a God - Sun, Moon, Rain, Thunder and Wind. Here, the masks are made of metal, a legacy left by the Incas, a civilization with a great experience in the metallurgical domain.

CUBA
Besides being worn in Carnival, the Cuban mask also retains a decorative purpose. Usually, are made of wood or paper paste and decorated with handmade paintings in bright colours.

Venezuela
The most famous mask in Venezuela is that of the Devil which is worn in one of the greatest traditional religious events in Venezuelan culture - Los Diablos Danzantes de Yare. It takes place in the city of San Francisco de Yare, on the nine Thursdays following Good Friday. It is a dance ritual in which people wear colourful costumes, mainly red, with satanic-looking cloaks and masks, crosses, scapulars, rosaries and other religious amulets. The “Devils” are people who participate in the party to fulfil religious vows and dance / fight to the sound of the drums along the city streets, against masked church members, to set forth both the power of the Church and of Good over Evil.

AMAZON
In the Amazon, the mask is part of indigenous rituals and its raw materials are the most commonly goods found in Nature, such as wood, seeds, scales and spines of pirarucu fish, a freshwater fish, which scales are utilized in local crafts.