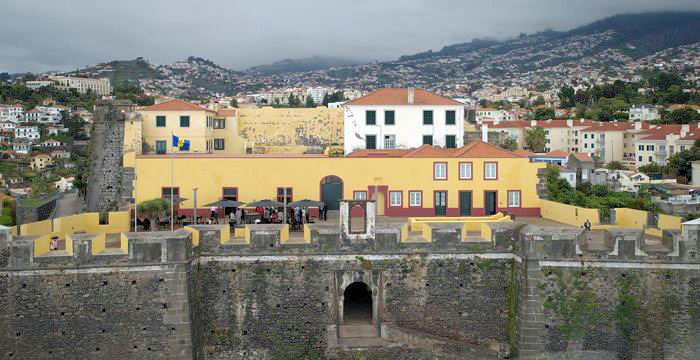 The Defences of the bay of Funchal

The prosperity of Funchal, towards the end of the 15th century, as a result of the sugar production and trade, made the then village, a well known place for traders both Portuguese and foreigners.

During this period, and until the mid 15th century, there was not in Madeira, an efficient army defensive system, even though there was a history of problems related to the corsaries and pirates.

In 1566, Funchal suffered a very serious attack by the corsaries, under the command of the French calvinist Bertrand de Montluc. This occurrence served as the driving force in starting an internal restructuring that would secure the defences around the island, more so in Funchal. Between the years of 1570 and 1590 new forts were erected, São Filipe (1582); the Fortress of São Lourenço, that existed previously as a bastion, at least since the 2nd quarter of the 16th century, was improved; the building of a battlement, under the initial guidance of Mateus Fernandes, master of Royal works and also a prominent fort builder in this island since 1567.

Effectively, the bylaws issued by the King D. Sebastião, approved in 1572, regarding the building of forts, started a campaign of construction of these defensive structures, providing Funchal with a battlement which construction lasted until mid 17th century.

Under the auspices of the Philip dynasty, in 1595, Jerónimo Jorge took over from Mateus Fernandes as the island fort builder in charge, keeping the continuity in the building of structures such as parts of the city battlement, from down at sea level up to the Fortress of São Tiago (1614), he also started the construction of the Fortress of S. João Baptista do Pico (1602-03).

Beginning in 1618, and, for approximately four decades, Bartolomeu João, Master of Royal Works, followed his father Jerónimo Jorge´s work, giving continuity and finishing the building of the fortresses of São Lourenço, Pico and São Tiago, building the Louros fort (1649) and the fort on the Islet of Nossa Senhora da Conceição (1652), as well as the building of the Customs stronghold (1644).

At the end of the 17th century, beginning of the 18th century, new forts were built on the island, such as the New Fort of São Pedro, adjoining the Santa Maria beach, and some works of restoration in the Fort of Penha de França.

Defending the city, with fire coming from different forts, placed on all sides, made it extremely difficult for ships to access the bay of Funchal, keeping it more protected.

It was named as such, due to its proximity to the ribeira de São João (stream), also due to the fact that it was erected on Pico dos Frias, as it is referred to, around the end of the 16th century. Its construction took place during the first decades of the 17th century, under the auspices of the Philip dinasty (1580-1640). Before being made out of limestone, construction that began in 1606, sixty thousand reis1 were spent for a caravel with forty moios2 of lime, it was a simple castle made out of wood (1602-1603).

This Fortress was part of the defensive system that protected the city of Funchal against the constant attacks of the pirates, French corsairs and Argelian moors, also functioning as a safety gate to the battlement, over the ribeira de São João (stream), as determined by the bylaws of D. Sebastião (1572).

In 1582, D. Francés de Alava y Belmont (c.1518-1586), who was in charge of the Artillery, under the reign of Philip the 2nd of Portugal, strongly suggested that the only two fortresses that existed in Funchal, were not enough to secure the defence of the city, suggesting the construction of the Fortress of S. João Baptista do Pico. It is during this year that, by Royal request,

D. Agustin de Herrera y Rojas (1537-1598), Count of Lanzarote, also the man in charge of war affairs, came to Funchal, accompanied by military forces of both the Canary Islands and Andalucia, in order to reinforce the Funchal fortresses, with no success, due to the local peasants stand-off. This project was represented in the plan of Mateus Fernandes, master of royal works, architect and fortifier, active between 1567 and 1597.

The construction of the Fortress of S. João Baptista do Pico, was extended. Between 1609 e 1613, the first stages of the construction works took place and in 1618, the foundation works took place, in order to start erecting the walls. During the time that Luis Miranda Henriques Pinto was the Governor of Funchal (1638-1641), the construction works were finalized, and an engraved stone was put in the place-of-arms, to certify and celebrate the achievement. The water reservoir must have been completed in 1639, as stated by the inscription on its wall.

In documents issued by that time, divulged by several historians the master of Royal works, engineer Bartolomeu João (active in Madeira: 1617/1618-1658), described, in 1654, the Fortress of S. João Baptista do Pico as an example of an insurmountable force, sitting on a rock, on top of a hill that looks over Funchal, within which, we can find three place-of-arms, each one surmounting the other; a drawbridge, a water reservoir, dug out of the rock, with a capacity for 3.000 barrels of water, armed with eight culverin, these being long range cannons.

In 1630, the poet Manuel Tomás, referred the fortress as haughtily promising / shielding the city at combat (Insulana, Ed. 1635), witnessing its imposing scenographic and strategic position, over the amphitheatre of Funchal, simultaneously as a great impact in the scenery and an excellent means of dissuasion for the enemy.

The chapel of São João was built or ornamented, in the beginning of the 18th century (c.1730) and dismantled during the 20th century, so that a Naval Radio Communications Station could be constructed in its place.

By order of the Governor and Captain General, António Jorge de Melo, whose official residence was the Fortress of São Lourenço, and due to a fire that occurred there, it was decided, towards the end of the 17th century that the Fortress of S. João Baptista do Pico, was to be used as the ammunition depot. Documents of that time, attest to the fact that, in June of 1758, the Bishop Governor D. Gaspar Afonso da Costa Brandão, wrote to the court, denouncing the high risk that the city was under, in keeping the amount of highly explosive material, in one place, enough to supply all the towers and fortresses of the island. In the beginning of the 19th century, an ammunition depot was then built, so that the material was moved out of the fortress.

During a short period of time, the fortress´s name was changed to São Miguel Fortress or Castle, as a tribute to the Miguelistas (reign of King Miguel) in the Portuguese Civil War context (1828-1834), reverting, after a while, to its original name.

Around the middle of the 20th century, the Fortress of S. João Baptista do Pico was handed over to the Navy, who used it as their base of communications, it became popularly known as Pico-Rádio.

Essentially, the S. João Baptista do Pico Fortress has maintained its original structure, of a Mannerism architectural style, with four pentagonal shaped bulwarks, that are set, in the interior, in two different levels, the place-of-arms is situated in the lower level, where this exhibition is located.

It was classified as a Building of Public Interest in 1940.