As part of the project developed at the museum, which resulted in a temporary exhibition and the edition, in 2019, of the book “Festas e Romarias da Madeira” (No. 3 of our “Cadernos de Campo” collection), we decided to share on our web pages Social (Facebook and Instagram) different albums, with some images, that are part of this work. We will visit all the municipalities and publicize different festivals, trying to highlight some aspects that characterize them.

You can find more information about this and other festivals at the “Portal dos Museus”, or, when everything returns to normal, you can consult the book, which is available in the stores of the museum and the “Direção Regional da Cultura”.

This week, we announce the “Festa de Nossa Senhora da Piedade”, which is celebrated in the parish of Caniçal, municipality of Machico, with the characteristic of procession by sea.

In all parishes religious celebrations or pilgrimages are celebrated, consecrated to God, the Holy Spirit, Our Lady and saints, represented by a relic or an image. They are distinguished from other religious festivals by the character of “pilgrimage”, from the route taken by the people to the sanctuary place, formerly on foot, through steep paths and shortcuts.

Usually these parties are held on weekends and originated by a legend, or were introduced by the first colonizers, as they brought their devotion saints with them, making them saints protectors of a certain locality.

The parties have sacred and profane characteristics.

Among the sacred rituals we have the celebration of novenas (nine masses, which are held daily, before the day of the entity being celebrated), confessions, mass and procession. Inside the church, people usually kiss the holy “festeiro”, in a kind of propitiatory blessing, symbolizing the acceptance of his miraculous power and the faithful fulfill and make promises, protecting their daily life.

The festival also includes the profane part, that is, the “arraial”, as it is popularly known. It is the space where you dance, sing, eat, trade, date, etc.

On those days, the church and surroundings are decorated with plants, namely the laurel, the myrtle, the boxwood and the broom, lights, flowers and flags.

One or more musical bands play through the streets, making intervals coinciding with the musical and folk groups. There are also groups of improvised players, who alternate a motto among themselves, or who sing to the challenge (despiques), to the sound of the “reco-reco”, the castanets, the harmonica, the “brinquinho”, the accordion and the string instruments: rajão, braguinha and wire guitar.

Since ancient times, the Portuguese have worshiped “Nossa Senhora da Piedade”. It is usually presented near the Cross and with Jesus dead in her lap, showing the pain of a mother with her dead son.

In Madeira, the devotion to “Nossa Senhora da Piedade” dates back to the beginning of colonization. Although not the patron saint of Caniçal, parish of Machico, its festivity, celebrated on the third weekend of September, attracts more people to this location than that of São Sebastião, patron saint of Caniçal.

Its chapel, built in the 19th century, is located on the top of “Monte Gordo” or “Piedade”, about four kilometers from the Parish Church.

According to popular tradition, the construction of the chapel is due to a promise by a group of sailors who, seeing their ship about to be smashed against the rocks on the coast, promised to build a chapel dedicated to Our Lady. The procession begins by land, and is then followed by an itinerary by sea, up to the chapel.

Many religious festivals are in charge of fishermen, namely the feast of “Nossa Senhora da Piedade” in Caniçal. Throughout the year, they set aside funds from the fish sale, to finance this pilgrimage. Sometimes, some faithful offer money for the feast, assuming the role of “festeiros”. There is still a group of people (men and women), from various places, the "pilgrims", dressed as sailors, who make offerings (money, embroidery, flowers, utilitarian objects, "jay", products from the land, sweets) who they are then sold, reverting the recipe to the party.

A few days before the party, between the skippers of the big boats, a draw is made to see which boat will carry the image (the holy boat).

On Saturday, starting at 3 pm, the priest, the “Irmãos da Confraria”, the band and the faithful leave the Parish Church and go to the pier, where the boats are anchored. The skipper, the band, the priest, the Irmãos da Confraria, the men who carry the andor and some of the faithful, go to the chapel, located in “Monte da Piedade”, where the image of Our Lady is found. The rest of the crowded boats, decorated with flags and palm leaves, followed him in a line towards the chapel. The shipowners made the boats available to anyone who wants to participate, and the trip is free of charge.

After a few minutes, they disembark at the “Quinta do Lorde” pier and go up a steep path to the chapel. At the entrance of the temple, the band plays the hymn of Our Lady and then accompanies the religious songs, sung by the devotees. Then they decorate the image with gold from graces obtained and place it on a stage, which is always carried by men, in fulfillment of promises.

Some people are still on the boats, taking the opportunity to take a walk to the end of the island and tuna sandwiches or “jayfish” and drinks are served. After a while, the boat returns to collect the procession, with the image of “Nossa Senhora” and they start their journey back to the village.

From time to time the band plays. The image is always placed with the face turned towards the chapel.

After disembarking, the procession goes to the Church Matriz, where a mass takes place. After the celebration, lines of believers are formed to kiss the image and make their promises.

At night the typical entertainment of the feast takes place.

In the early afternoon of the following day, after the mass was over, the maritime procession left again, to take the opposite route, returning the image to its chapel, but this time with its face turned to Caniçal, to launch its blessing on the land. and about its inhabitants. 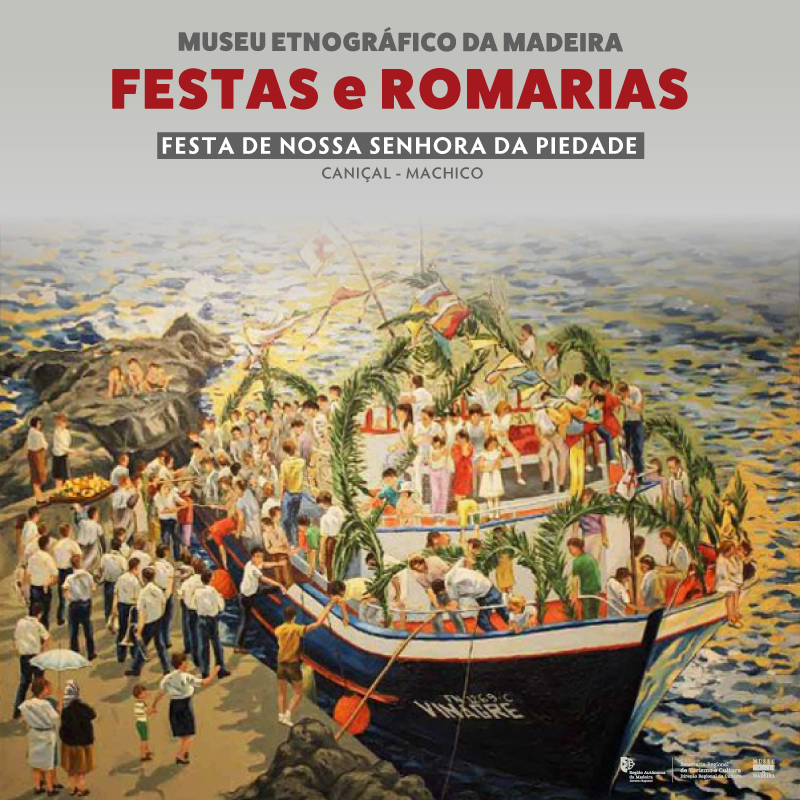 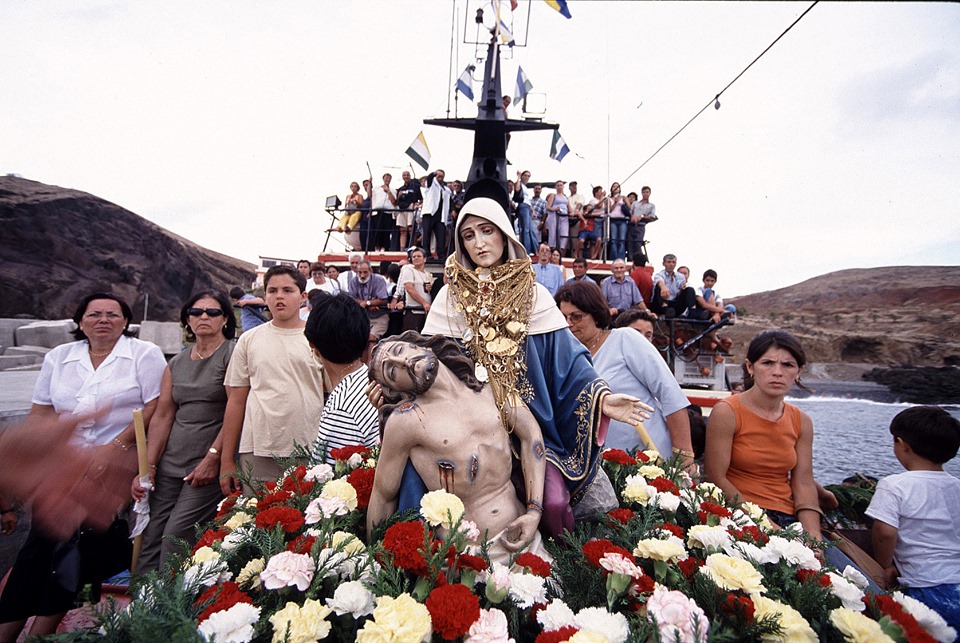 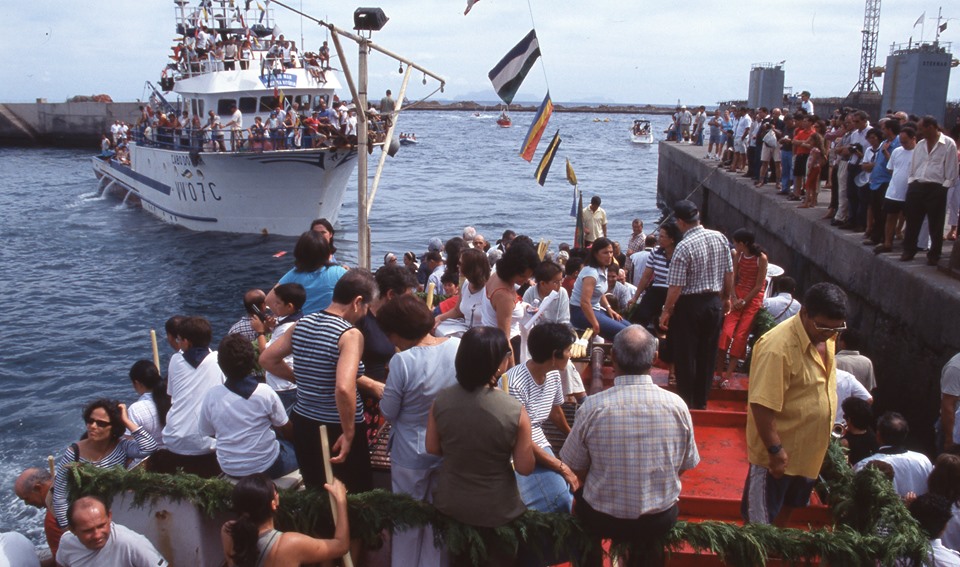 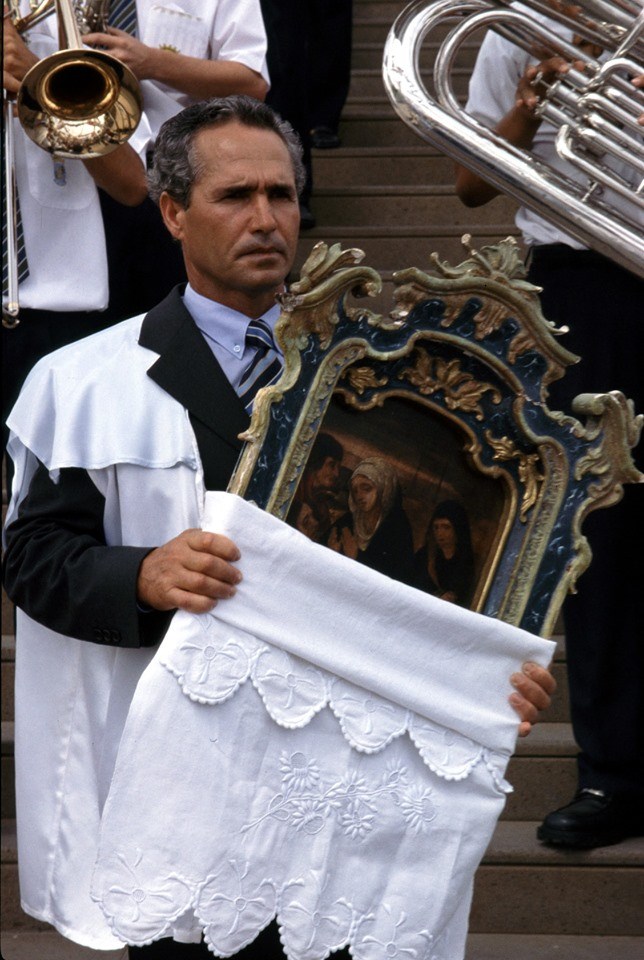 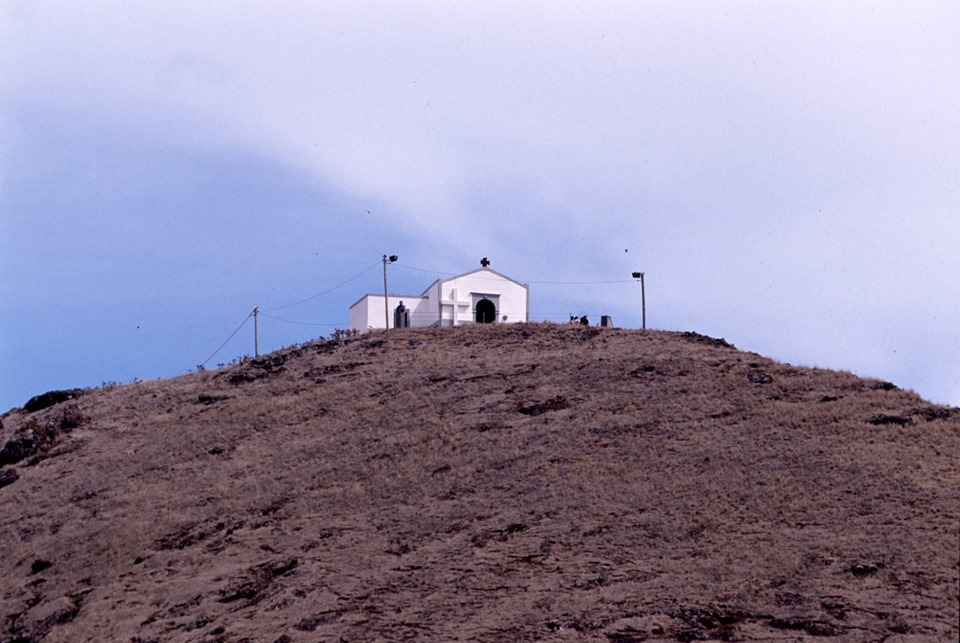 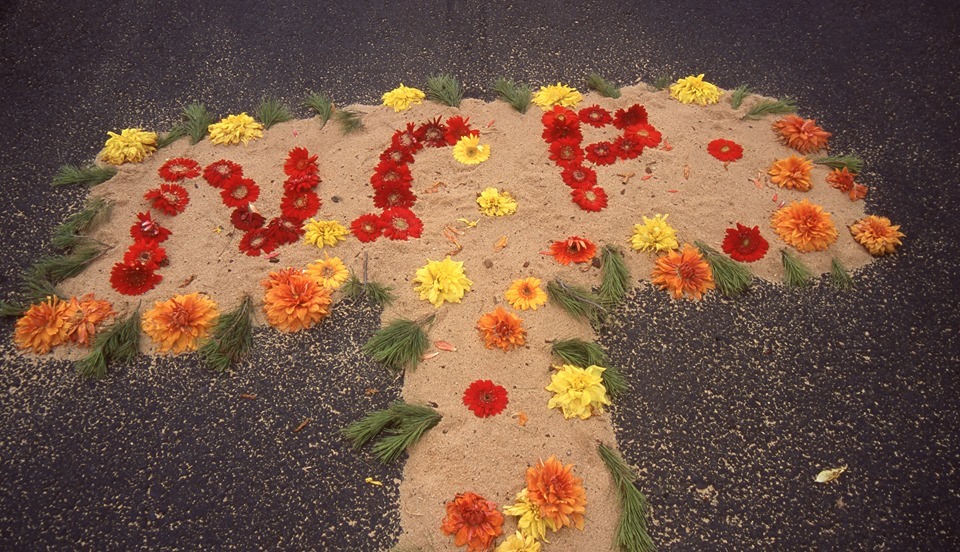 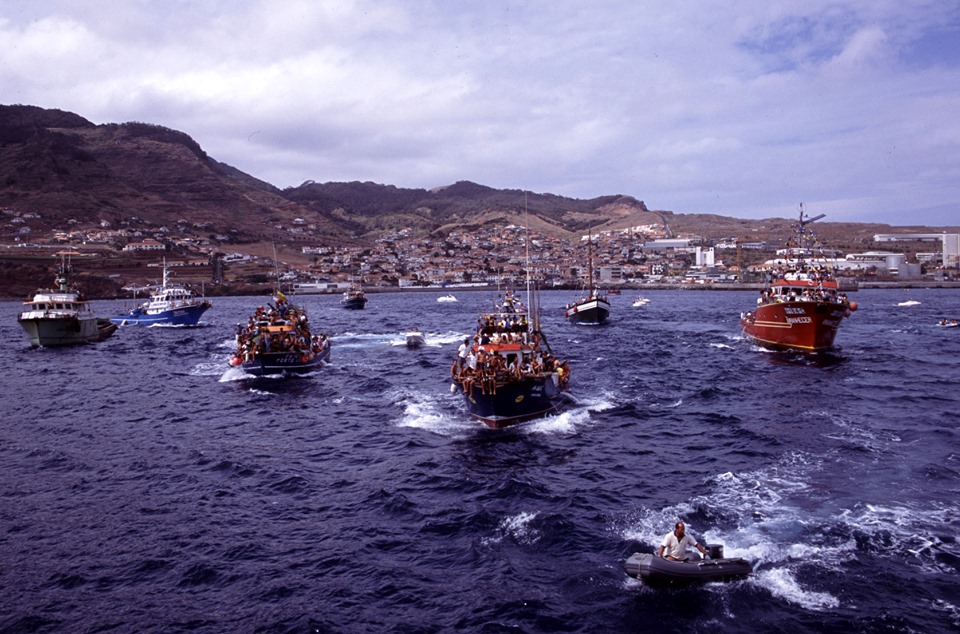