We highlight some curiosities about the painter Albuquerque Mendes, a native from Trancoso (Beira Alta), who, after thinking of being a priest, became one of the best known Portuguese artists of the generation of painters that emerged between the mid-1970s and the early 1980s. He began his academic career in the Civil Engineering course of the University of Coimbra, where he attended the Circle of Fine Arts, between 1970 and 1975. He would quit the Engineering course, moving exclusively to artistic activity. He held his first solo exhibition in 1971 at the CAPC Gallery, influenced by expressionism, “bad painting” and Dadaism. In the 1970s, he developed his first projects in the field of performance. Ritualized exercises that he streamlines in various interventions in public spaces, such as Praça da Liberdade and Avenida dos Aliados, in Oporto. In these interventions, links to the rituals of processions and religious and profane manifestations of Portuguese popular culture were visible. He was part of the Puzzles (1976-1980) - a group of artists who, in the post-25th of April, carried out a series of public interventions in various parts of the country, through a collective and ludic action free of political commitments - to which Gerardo Burmester also belonged, with whom he founded, in 1982, in Oporto, the Art Association Lusitano Espaço, where much of the avant-garde art of the 1980s passed through. Albuquerque Mendes gained great international visibility with the performances he developed during this period, having participated in some of the most important festivals, such as in France, the Pompidou Centre in Paris, and the Symposium of Lyon, Germany and the Netherlands, alongside artists such as Joseph Beuys, Wolf Vostell or Orlan.
Multifaceted artist, he exhibits regularly in Portugal and Brazil. In 2001, the Serralves Foundation held the artist's first anthology exhibition: Confesso ("I Confess").
His work confuses with life itself. For the same reason, it is autobiographical, ironic, metaphorical and, at the same time, intensely theatrical.
He is represented in the MUDAS collection with several pieces, among which Gravidade Plena ("Full Gravity"), which today we highlight. 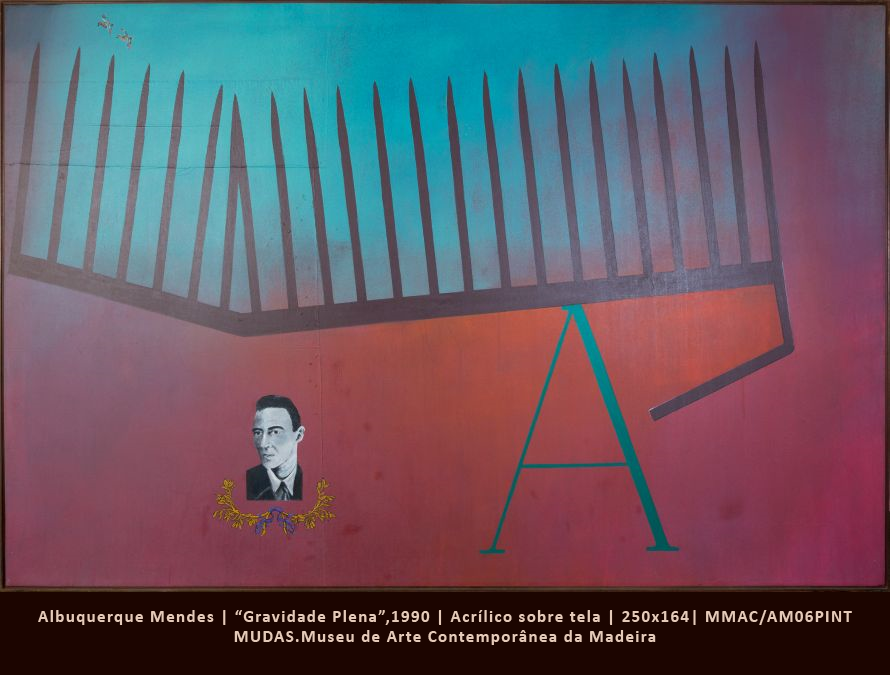