Joaquim Rodrigo was born on July 7, 1912, in Lisbon. He completed the courses of Agronomic Engineering and Forestry Engineering. In 1950, he enrolled in a night Painting course of the National Society of Fine Arts, a training project that he eventually abandoned in 1951. A self-taught painter, in 1952 he made a great trip through Europe, visiting numerous museums and closely contacting the artistic production of the time.

Joaquim Rodrigo's work mirrors distinct periods of pictorial and conceptual exploration. In a first phase, from 1951, his painting is marked by an abstract and geometric awareness of creased rigor and chromatic synthesizer, which materialized in the simplified use of four colors: red, ochre, white and black.

In a second phase, from 1960, he focuses on the search for figurative representation and the narrative of the real, through the creation of its own symbolic language, strongly critical of the political-social context. By carrying out his activity in a regime of tight censorship, he used codified elements in his paintings. In a third phase, he continued the narrative contents initiated in the previous production, but focusing its pictorial action on the representation of travel itineraries consisting of synthesized signs from the formal, structural and chromatic point of view.

In 1966, Joaquim Rodrigo participates in the City of Funchal Grand Prix of Fine Arts, having been awarded the first prize in this event with the work Guarda-Noturno (“Night Guard"), currently belonging to the collection of MUDAS.

He maintained his artistic activity until his death, on 18 January 1997. 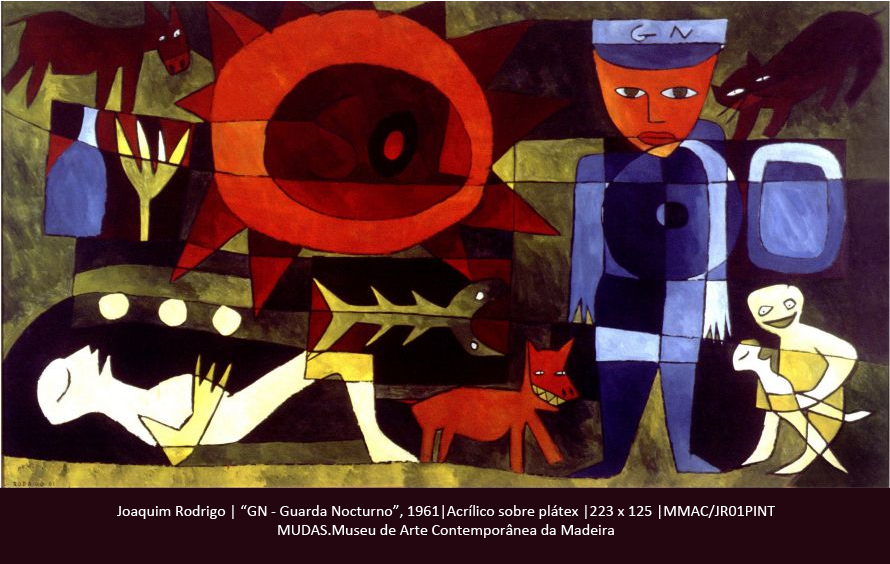