In the collection of the Quinta das Cruzes Museum there are three works by painter Tomás de Anunciação (1818-1879). A Feira de Gado ("The Cattle Fair"), from 1861, and two others dated 1865, also the year of an international exhibition in Oporto, where Anunciação received the medal of honor. Both works have western and eastern views of the bay of Funchal, presenting a city asleep by a melancholy filtered light of the heavenly blue sky, reflecting in the faded green shades of the landscape. But it is, above all, at the "Picnic" that our eyes are fixed full of curiosity.
As a background, an extensive western view over Funchal from Quinta do Palheiro Ferreiro, owned by the Earl of Carvalhal, which the painter represented with the family and some servants, in the foreground, having an outdoor picnic. An internationality that suits him, as he fought for the outdoors, in a landscape cut out of romanticism, crossed by naturalizing inspirations.
Let us remember here Os cinco pintores em Sintra ("The five painters in Sintra"), by Cristino da Silva, in which Anunciação, not for lack of opportunity, was placed at the centre of the composition. It had been the flagship of this painting, which was intended to be in direct contact with nature.
Tomás de Anunciação was in favor of the practice of painting in the field itself, fleeing the atelier. He was looking for the construction of a naturalized pictural space, as José Augusto França tells us (A Arte em Portugal no século XIX” / "Art in Portugal in the 19th century", vol.1, Bertrand, Lisbon, p. 260).
Recently, the painting "Picnic" participated in the temporary exhibition Tomás da Anunciação (1818 - 2018): Bicentenário do Nascimento do Artista ("Tomás da Anunciação (1818 - 2018): Bicentenary of the Birth of the Artist") at the National Contemporary Art Museum of Chiado, which was open to the public from October 2018 to March 2019.
Source: Obras de Referência dos Museus da Madeira, 500 anos de História de um Arquipélago ("Reference Works of the Museums of Madeira, 500 years of History of an Archipelago"); SRE/DRAC/DSM; 2009. [catalog entry no. 207].
Credits: Quinta das Cruzes Museum. 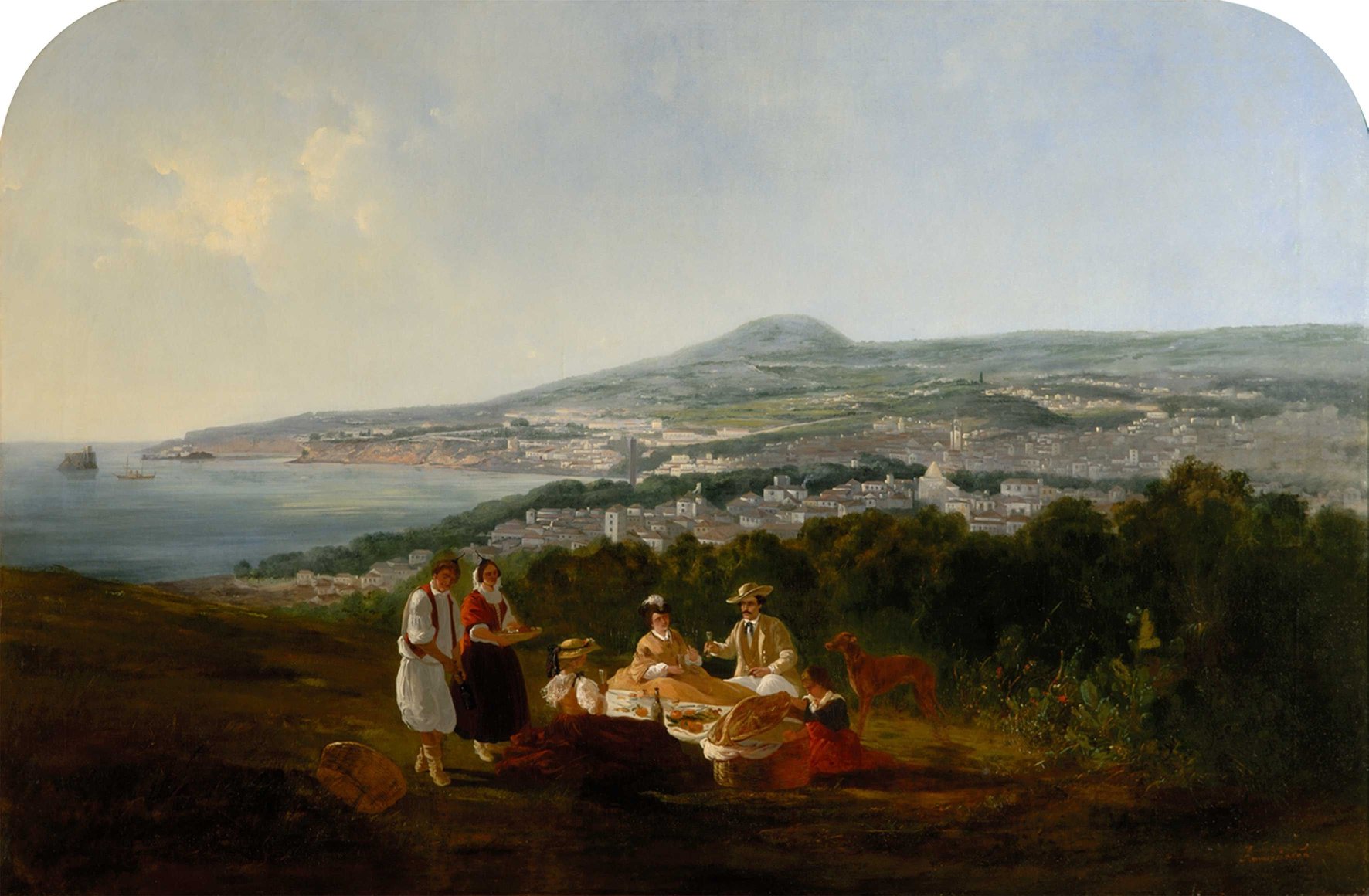 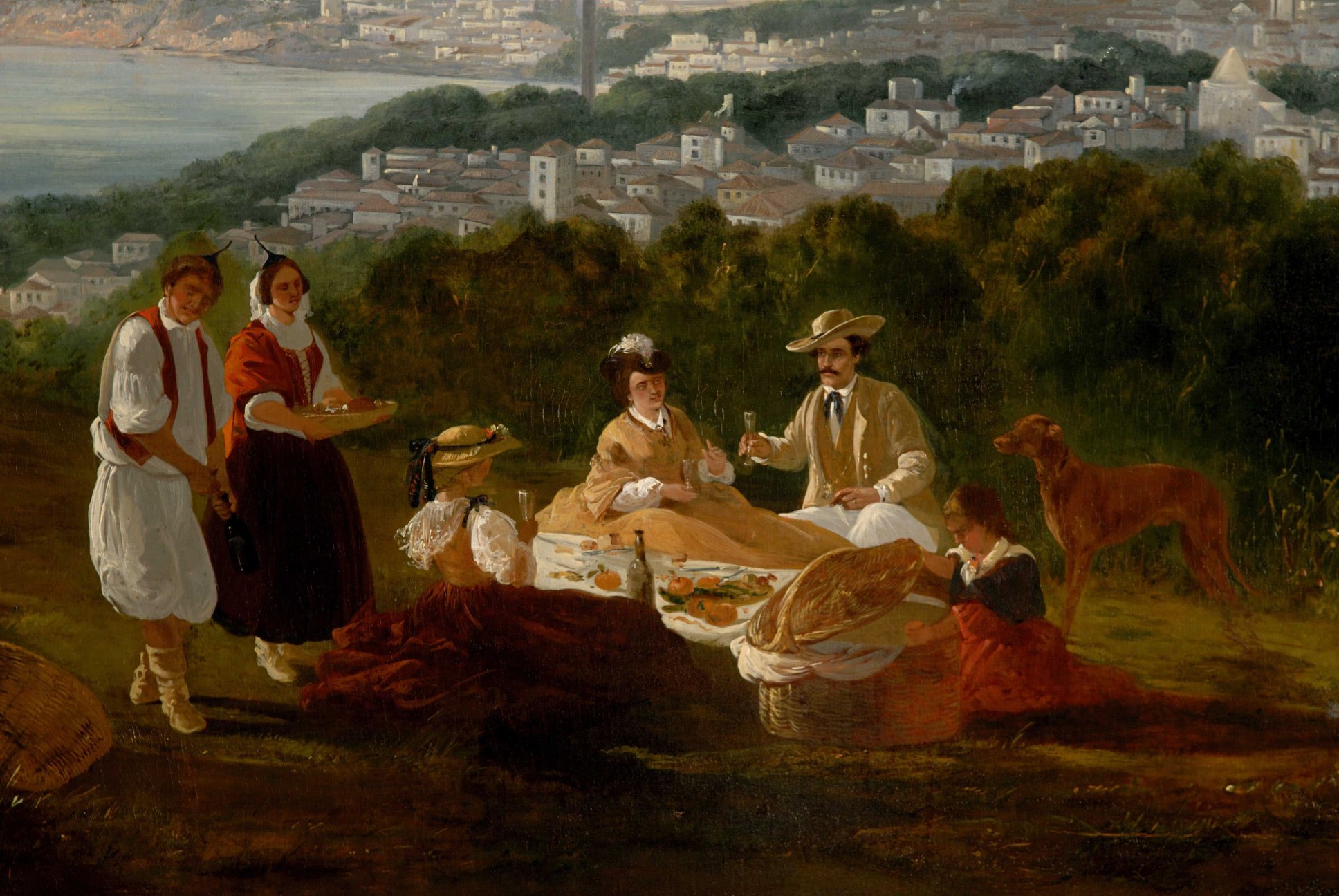 In the foreground, a family group with a couple and their two daughters sitting on the floor, around a white extended towel, on which the food is placed.

Frontwards, the Earl holds a cup with a hat on his head. In front, backwards, his eldest daughter, Maria das Dores, who also holds a cup; on the opposite side is the youngest daughter, Teresa, who peeks inside the basket. To the left of the pictured family core there is a couple of peasants, he opens the bottle and she carries what appears to be a dish with fruit.

In the background, a view of the city of Funchal, from Quinta do Palheiro Ferreiro, which covers the entire horizon.