Some notes about Fernando Calhau featured under the rubric Um dia, uma obra ("One day, one work").

Fernando Calhau was born in Lisbon, in 1948. In 1973, he graduated in Painting at the Lisbon College of Fine Arts. He studied at the Slade School of Fine Arts, in London, with a scholarship from the Calouste Gulbenkian Foundation, where he studied Engraving. In 1968, he held his first solo exhibition, Gravuras Brancas ("White Engravings").

In the 1970s, he started a practice structured by series in which monochromatism and geometric purification placed him in close harmony with Conceptual Art and Minimalism. He also uses super 8 film, video and photography as media. In the 1980s, he introduced iron, blue neon and the written word to his aesthetic body. The latter assumes a decisive role in his work.

In 2000, he won the Energias de Portugal (EDP) Painting and Drawing Awards. In 2001, one year before his death, he held two exhibitions at the José de Azeredo Perdigão Modern Art Centre and another at the Calouste Gulbenkian Foundation: Passageiro Assediado ("Harassed Passenger") and "Work in Progress". In the same year, he was awarded the "Miró-Picasso" medal by UNESCO and received the International Association of Art Critics (AICA) Prize.

In this painting, an acrylic on canvas, composition of purified forms, Fernando Calhau invites us to a careful observation, instigating us to look through the aeriform blackness and contemplate the material and temporal void of the piece, referring that in his painting "black has this quality of unknown (...) or of its promise." 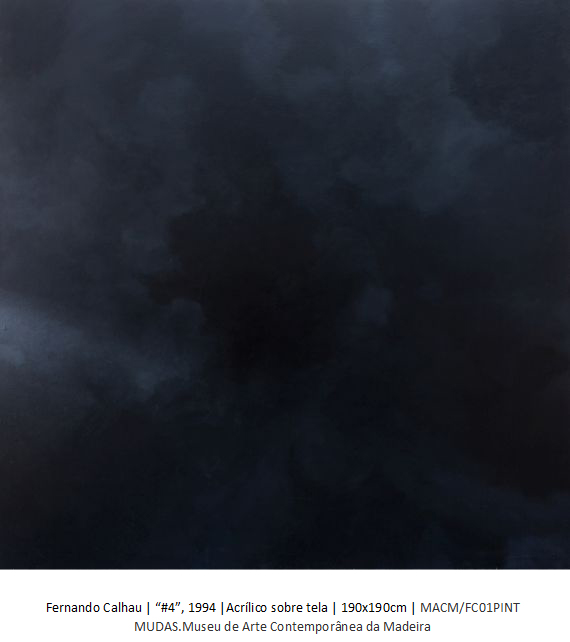