Festivity of the Holy Spirit

As part of the project developed at the museum, which resulted in a temporary exhibition and the edition, in 2019, of the book "Festivities and Pilgrimages of Madeira” (No. 3 of our “Field Notebooks” collection), we decided to share on our social networks pages (Facebook and Instagram) different albums with some images that are part of this work. We will 'visit’ all the municipalities and publicize different festivities, trying to highlight some aspects that characterize them.

This week, we announce the Festivity of the Holy Spirit, in Camacha.

The rituals of the Holy Spirit are very old and have their origin in traditions of different peoples linked to agricultural cults, as well as in Christian movements that followed the purity of the original Christianity, based on the Gospel of St. John. It is integrated into the Catholic religion as an element of the Holy Trinity, but it represents a single entity.
The worship of the Holy Spirit is performed during Pentecost. From Easter Sunday until the fiftieth day after that (Pentecost Sunday), it is customary on Whit-Sundays (known as Domingas) and holy days, to carry out, in each parish site, the visits of the Holy Spirit to the homes of parishioners and, last Sunday, to the commercial establishments. This visit consists of members from the Confraternity of the Blessed Sacrament, who wear a sleeveless red silk garment and carry a pennant, the flag of the Holy Spirit and a salver to collect the gifts, which they deliver to the Church and the Festivity Commission. Sometimes, the insignia are kissed at the entrance and exit.

They are also accompanied by players and the so-called saloias (country girls), who sing allusive songs and carry a cobblestone-shaped basket, with a lid, which in Camacha is made of thin whole wicker and serves to transport the received sweets. They wear a white shirt and a red cape over their left shoulder. Some wear white skirts and others are colour-striped in red, yellow, blue, white and green. The girls are adorned with gold, borrowed by parishioners, and leaves of Semele, as an announcement of spring. On their heads, they carry a cap ornamented with gold cords.
The visit of the Holy Spirit serves as an excuse to bring the family together in a festive atmosphere. The house is decorated to receive his blessing, which is believed to be effective and protective throughout the year.
In the past, the "Emperor", with a silver crown in his hand, topped by a dove, along with three other confreres with the insignia, visited all the houses of the village during Pentecost, receiving gifts. After this collection, aimed at the poor and as a way of thanking the offers, the "Emperor" was invited to place the crown and sceptre on them, because they were given protection and fertility power for the crops. Nowadays, the "Emperor" joins the group last Sunday, when visits to commercial establishments are carried out, taking the crown with him in a silver salver.
The "Emperor" is considered the incarnation or the earthly representative of the Holy Spirit and is the intermediary between community and the deity. He is considered the main confrere and is the “head” of this festivity.
After the visits, on the last weekend and Pentecost Monday, there is a popular party, the so-called arraial, with food and drink stalls and musical entertainment. In the late afternoon of that Sunday, the "Procession of Bread" takes place, which runs through the main streets of the village to the parish church. Due to its symbolic meaning, linked to the old fecundity / fertility rites, bread appears as a mystical offering in the Holy Spirit. This is a provider of family and community abundance, and functions as an element of community unity.
In addition to bread, they transport agricultural products in large giga baskets and sweets on trays with rose petals, topped by red flags with white doves, symbol of the Holy Spirit, and which are displayed in the pantry and distributed to the poorest. These products are offerings as a result of promises made to the Holy Spirit and work as a means of repaying graces previously received.
Nowadays, in Camacha, as in other parts of Portugal, the distribution of food, clothes and money to the poor is no longer a meal that the “Emperor” offered to twelve poor people and has become an abundant lunch. It is held on Monday, usually at his home, for the Members of the Confraternity, the former “emperors”, the confreres, the members of the Festivity Commission, the priest, the official entities, the philharmonic band, the family and countless guests.
From 8 PM, in Largo da Achada, the election / nomination ceremony for the new "Emperor", or "Empress", takes place. All candidates take a paper out of a bag and the one who takes the paper with a dove of the Holy Spirit will be the new "Emperor". 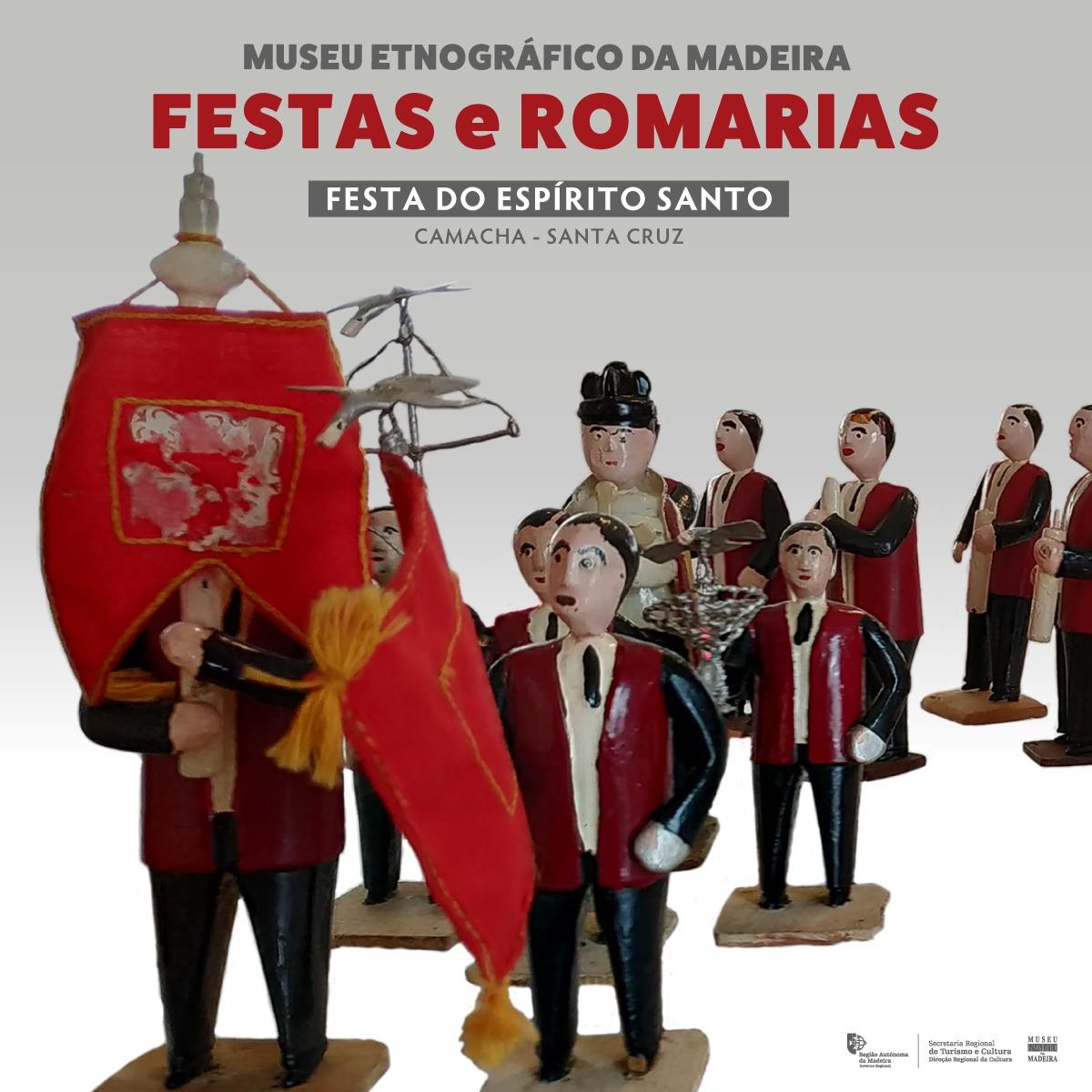 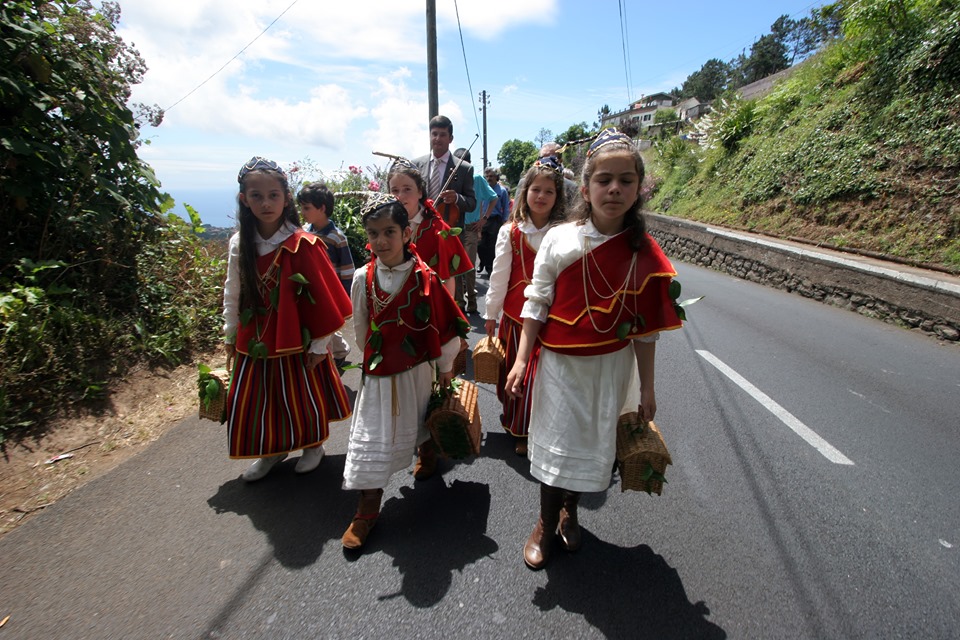 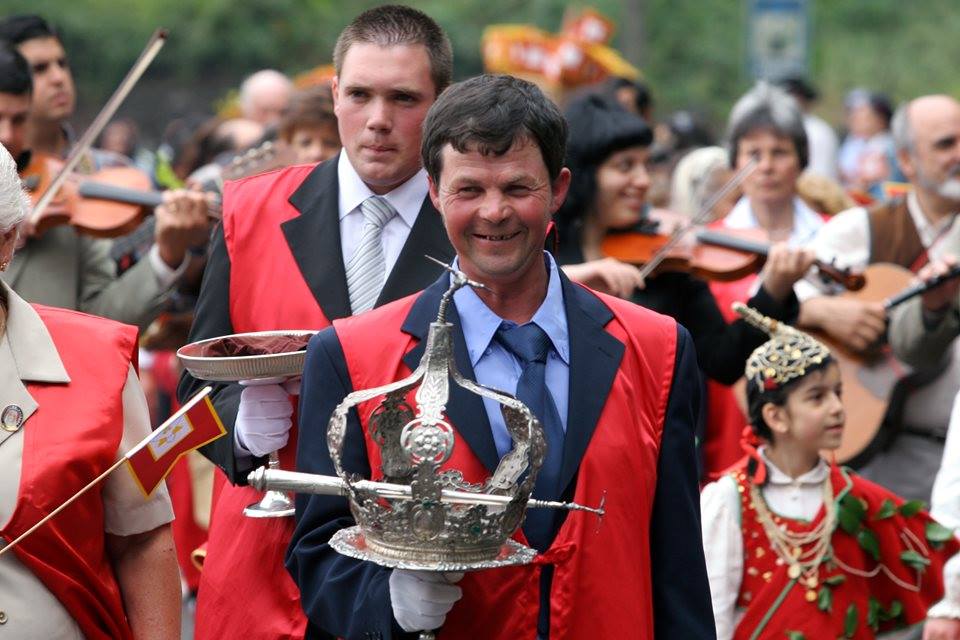 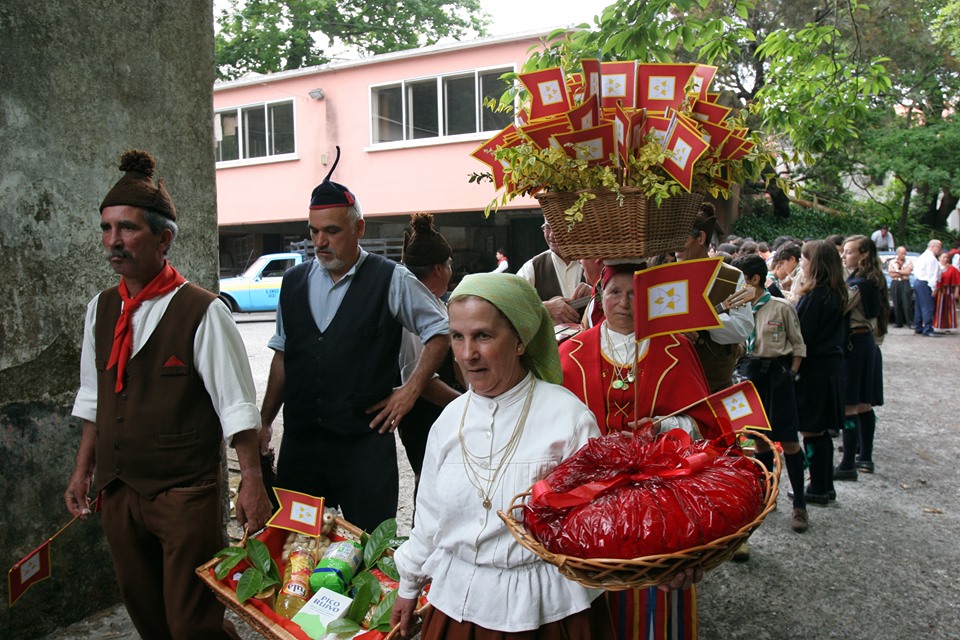 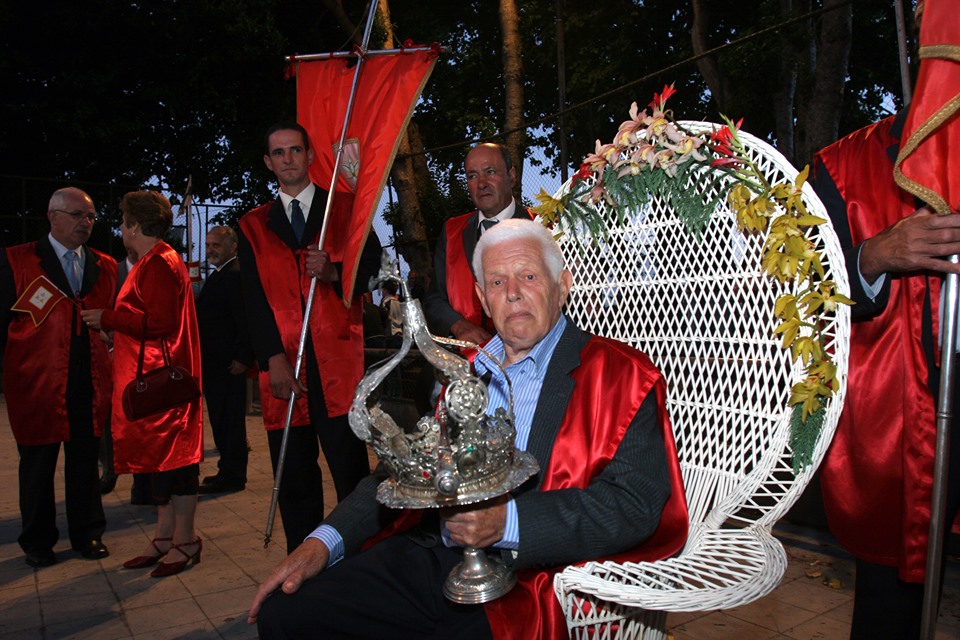 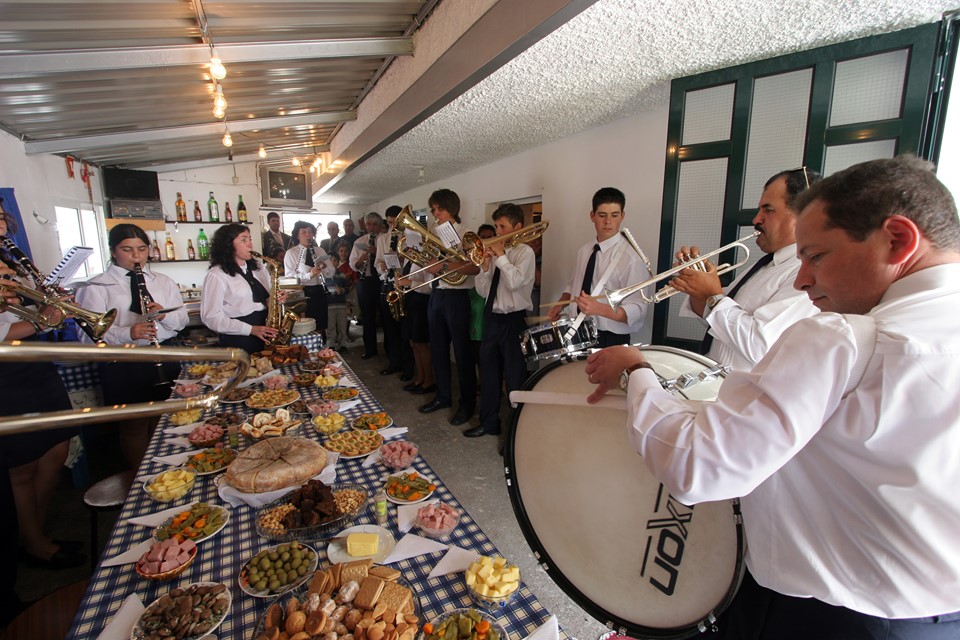 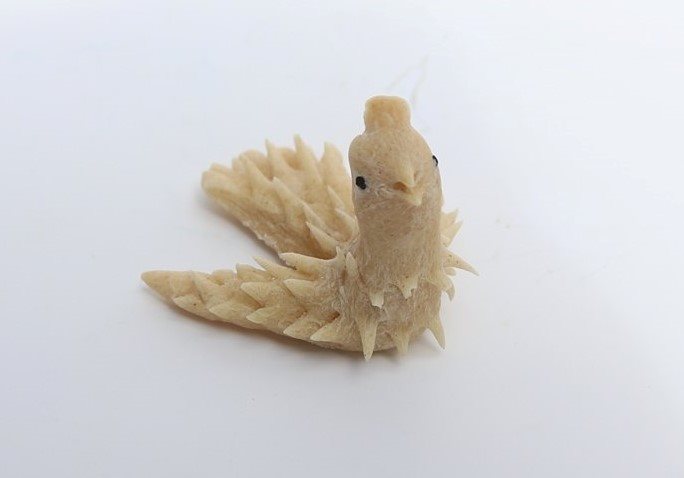